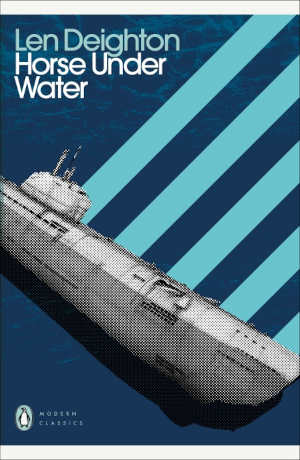 A sunken U-Boat has lain undisturbed on the Atlantic ocean floor since the Second World War – until now. Inside its rusting hull, among the corpses of top-rank Nazis, lie secrets people will kill to obtain. The sequel to Len Deighton’s game-changing debut The IPCRESS File, Horse Under Water sees its nameless, laconic narrator sent from fogbound London to the Algarve, where he must dive through layers of deceit in a place rotten with betrayals.

Len Deighton was born 18 February 1929 in London. He did his national service in the RAF, went to the Royal College of Art and designed many book jackets, including the original UK edition of Jack Kerouac’s On the Road. The enormous success of his first spy novel, The IPCRESS File (1962), was repeated in a remarkable sequence of books over the following decades. These varied from historical fiction (Bomber, perhaps his greatest novel) to dystopian alternative fiction (SS-GB) and a number of brilliant non-fiction books on the Second World War (Fighter, Blitzkrieg and Blood, Tears and Folly). His spy novels chart the twists and turns of Britain and the Cold War in ways which now give them a unique flavour. They preserve a world in which Europe contains many dictatorships, in which the personal can be ruined by the ideological and where the horrors of the Second World War are buried under only a very thin layer of soil. Deighton’s fascination with technology, his sense of humour and his brilliant evocation of time and place make him one of the key British espionage writers