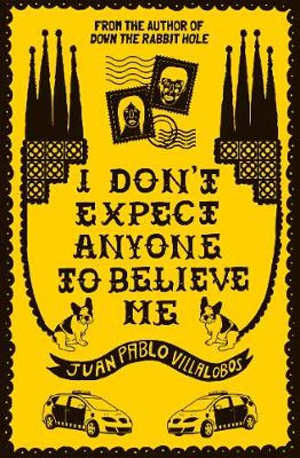 I Don’s Expect Anyone to Believe Me

I don’t expect anyone to believe me, warns the narrator of this novel, a Mexican student called Juan Pablo Villalobos. He is about to fly to Barcelona on a scholarship when he’s kidnapped in a bookshop and whisked away by thugs to a basement. The gangsters are threatening his cousin—a wannabe entrepreneur known to some as ‘Projects’ and to others as ‘dickhead’ – who is gagged and tied to a chair. The thugs say Juan Pablo must work for them. His mission? To make Laia, the daughter of a corrupt politician, fall in love with him. He accepts . . . though not before the crime boss has forced him at gunpoint into a discussion on the limits of humour in literature.

Part campus novel, part gangster thriller, I Don’t Expect Anyone to Believe Me is Villalobos at his best. Exuberantly foul-mouthed and intellectually agile, this hugely entertaining novel finds the light side of difficult subjects – immigration, corruption, family loyalty and love – in a world where the difference between comedy and tragedy depends entirely on who’s telling the joke.