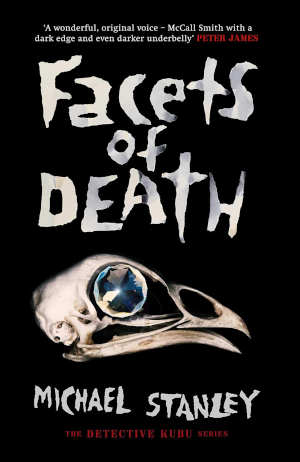 When a South African mine is robbed of 100,000 carats of diamonds and the thieves are murdered execution-style, Botswana’s Detective Kubu begins a terrifying international investigation in this chilling prequel to the award-winning Detective Kubu series.

Recruited straight from university to Botswana’s CID, David ‘Kubu’ Bengu has raised his colleagues’ suspicions with his meteoric rise within the department, and he has a lot to prove.

When the richest diamond mine in the world is robbed of 100,000 carats worth of gems, and then the thieves are killed, execution-style, Kubu leaps at the chance to prove himself. But where are the diamonds? And what role does a witch doctor and his son play?

Does this young detective have the skill – and integrity – to engineer an international trap? Or could it cost him everything, including his life?

A riveting, chilling prequel to the award-winning Detective Kubu series, Facets of Death introduces the beloved Kubu and his richly described native Botswana, in a dark, sophisticated thriller that will leave you breathless.